How are Sex Crimes Handled in Downtown Los Angeles?

If you don't know the Los Angeles downtown court at 210 West Temple, it is the main courthouse where most sex crimes are prosecuted.  The reason for this is direct across the street is the central hub of the District Attorney's office that handles sex crime cases at the Hall of Records.  All of the DA's are housed there.

There's a vast building there that's been refurbished, so that's pretty much their power hub as far as most prosecutors are.

In today's society, with sex crimes and sexual harassment being so much in the public view and targeted by the prosecutors, thousands of cases are being prosecuted in the District Attorney's office, and even the City Attorney's office will prosecute misdemeanor cases in the same building.

These cases are being prosecuted politically, meaning the prosecutors are very harsh depending on precisely what happened.  Often, they're looking at what the damage is to the victims. 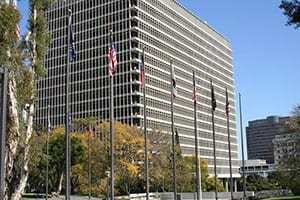 Whereas, if there's a specific victim who's been raped, for example, or touched inappropriately, like a sexual battery situation, then the prosecutor on the case will have the chance from the beginning to the end.

They're so rigorous about this that even if you're going in there to continue a case because you need more time to investigate it, they will not let you do it unless the particular prosecutor assigned to the point is there in the courtroom to make sure it's good with their schedule.

These people are tracking cases through the system.  I just had an issue where my client was out on bail from the downtown courthouse for a sex-crime severe offense.

He picked up a new offense in a different jurisdiction in Los Angeles county.  The investigating officer on that offense could figure out who the prosecutor was and called her and let her know of the new crime.

She, in turn, called me, indicating that she was going to try and seek to revoke his bail in the open case based on him committing new sex crime-related offenses while he was out on bail.

The point is, they're very coordinated when it comes to sex crimes in downtown Los Angeles.  You're going to need an attorney who knows the ropes and who has handled these cases before.

I've often seen attorneys get involved with these sex crimes, and they have no idea what they've got themselves into, and they're just a complete mess, and their client suffers for it.

Then I ended up getting on the case because I was hired. I saw that these attorneys did not know what they were doing and didn't know how to investigate the case properly, didn't know who to talk to about trying to resolve the case, didn't know what mitigating factors to be used to try to get a better resolution in the case for their client.

So, be careful when you choose your attorney.  You have to make sure you get somebody who knows what they're doing.  Most of these cases are severe if they're in the sex crime-related category and the deck is stacked against you already.

Don't further stack the deck against yourself by getting an attorney who doesn't know what they're doing and who is not familiar with how to prosecute sex crime cases to get the best results for their client.

So, to me, there's a whole strategy in defending a sex crime case in the downtown courthouse because to give you an idea of how things work, if you or a loved one has a severe sex crime case in downtown Los Angeles and is being prosecuted at 210 West Temple, or even in the other courthouses. Still, that courthouse, in particular, has a whole pecking order and structure on how they deal with their cases.

If you want to resolve the case, the number two in command will typically be the one you negotiate with before the preliminary hearing.  So, I would typically put together a litigation package for her and set an appointment to meet with her face-to-face and send the mitigation package in beforehand.

So, she can see all the good things about my client — character letters and other things that apply to the client's case, and then go and meet face to face.

Then you're just having a good discussion about some of the issues in the case, what the defense believes is a fair resolution of the case. Of course, the prosecutors will look at what they feel they must have to protect society and punish the defendant for a particular topic.

So, this is just the iceberg type as far as the nuances surrounding sex crime cases in downtown Los Angeles. The sex crime category has broadened over the last 25 years that I've been practicing — including the internet — child pornography is a big thing that is prosecuted, especially those who are going on the internet.

There are many different investigative tools that law enforcement can use that are very effective, like a SAR exam, a sexual assault exam, DNA testing, and fingerprint testing.  There are all sorts of different things depending on the case's particular facts.

So, if you have a sex crime in downtown Los Angeles, you've come to the right place.  You've taken the first step.  Take the next step.  Pick up the phone.  Set up a meeting with me so we can discuss your matter.