What Happens If My Computer is Seized in a Child Pornography Investigation?

What Happens if the FBI or Police Come and Seize Your Computers and Other Devices in a Child Pornography Investigation? Often, people are at home, and the FBI and police come, knock on the door, and serve a search warrant.

They take their computer and all of their electronic devices, including their phone, ask them a bunch of questions about child pornography and downloading child pornography, and whose computer that is, and then they leave. They leave them obviously, scared and not knowing exactly what will happen next.

To give readers a better understanding of what happens when your computer is seized relating to a child pornography investigation, our California sex crime attorneys provide an overview below.

What you need to do in that scenario is get to an attorney right away.  I handle many of these types of cases and what we do is call the police up.  We find out who's in charge of the investigation.

Whether it's the FBI agents, Homeland Security, or a local police department in your area — and then I will also find out whether or not there's a prosecutor involved in the case.

If it's a federal case, it will be an Assistant U.S. Attorney.  If it's a state case, it will usually be the District Attorney's office, and then we'll try to get a time frame on how long it will take them to investigate.

I will operate as a buffer between you and the police to don't answer any more questions that could potentially incriminate you.  Then, a lot of times, it's a waiting game, where the police have taken whatever they've seized, and they're having them analyzed by an expert who's attempting to extract the information from your computers, your phone, tablets, or other devices.

A lot of times, that takes time.  It's not easy.  Sometimes they're not able to extract certain things.  But in my experience, most of the time, if they seize your computer, even if you've deleted something or you have some encryption on it, the experts that they use are going to be able to get in there and find it.

An Expert analyzes the computer

I have seen, though, where people have smashed their computers, that sometimes that can cause a problem for them to get in there and extract the data out of there and try to use it against you. 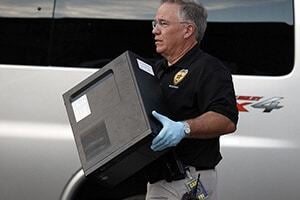 We're getting ready to indict your client.  We want to know if you're going to cooperate or not. Most of the time, depending on the circumstances, we want to cooperate because we want to keep you out of custody while we deal with the case and minimize any potential damage to you.

Suppose they've got the evidence against you, and they're going to be able to prove the case. In that case, we want to coordinate with the prosecutor to get you released when you make your initial appearance in federal court or get your bail as low as possible if the case is filed in state court.

So, if you've got a case where the government has come in and seized your devices, you're looking at potentially going to prison, you're looking at sex registration and a whole host of other issues — you want to hire an attorney, right away.

Let that attorney work on your behalf so that you can end up with the best possible result in the case and stay out of custody if possible, and not have to spend thousands of dollars on bail — a lot of this can be coordinated by your attorney before a case is ever even filed, especially in the scenario where they're seizing child pornography and trying to use that against you.

Whether it will be prosecuted at the state or federal level will depend on a whole host of different factors, but the main factor is how many images they find and how many videos they find.

Damage Control by Your Attorney

So, a lot of times, they can charge you with that.  Sometimes you can even look at a mandatory minimum in custody depending on what is set and how your defense attorney handles the case.

So, suppose the FBI, Homeland Security, or any other government agencies come in and execute a search warrant at your home. In that case, you want to get an attorney right away to start protecting your rights, your interest, and your freedom.